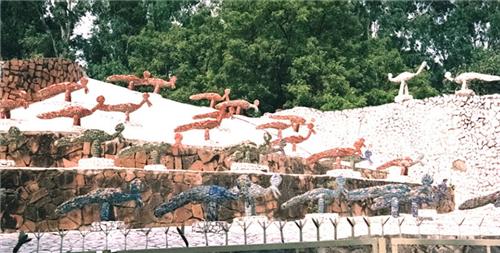 Pinjore Gareden is situated in the village of Pinjore which lies at a distance of about 22 kilometres from Chandigarh, The garden represents Mughal architectural style and was built by Patiala dynasty rulers. The idea and design of the garden was conceived by Nawab Fidai Khan, who was the foster brother of the most atrocious Mughal ruler, Aurangzeb. After Fidai khan left the place, the garden was subjected to years of neglect and was reduced to a thick and dense forest. The garden was later refurbished by a ruler Named Yadavindra Singh, on whose name then the name of the garden was re christened to Yadvindra Gardens. The architecture of the garden has been done in the form of seven terraces which has been given the name of mahals each with its own significance.

Upon entering the main gate of the garden, one gets a view of the highest terrace  which has a palace built in Rajasthani–Mughal  architectural style. It is called “Shish Mahal”. Adjacent to Sheesh Mahan is the romantic "Hawa Mahal". The terrace which is second in line is ordained with arched doorways and has the palace named "Rang Mahal" (painted palace).

The next terrace has the "Jal Mahal" (palace of water) with a square fountain bed and a beautiful platform to relax and rejuvenate. Fountains and tree groves are provided in the next terrace. The lowest terrace has an open-air amphitheater, which is designed as a disc-like structure. A zoo is locates just adjoining the gardens. The garden also has a temple complex which is beautified by Mughal architectural style. The water bodies of the garden are kept absolutely clean and have proper sanitation. The pathways are well cobbled and are well illuminated. The night view of the garden are breath taking and offer an amazing sigh to the visitors.

C.M. Villiers-Stuart, who resided in the gardens for a time, has made a flattering description of the gardens in her book on "Gardens of the Great Mughals".A rarely known folktale about this place says that when by and large the work of the gardens had finished and garden was in its most beautiful form, Fadai khan decided to visit this place and enjoy his summers here along with his ranis amidst the beauty and splendour of the place. On knowing this, the rajas of the region hatched a conspiracy and attacked this place not with swords or weapons but by mixing some poisonous element in the pond and well because of which the water bodies of the region became polluted. Anyone who drank that water got Goitre. Slowly and steadily the entire region came within the ambit of this biological attack induced by the rajas. 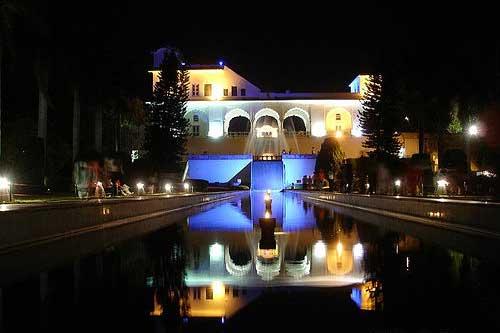 The ladies of the area were terribly horrified by this new terror that has come to haunt them. As it is being brought into these dense and inhabitable forests was bad enough and top it all was the grave danger that has made their lives all the more miserable. The habitats of this place deciphered that the air of Pinjore has been infected by some secret element which is causing this disease which seemed to be inescapable. Fadai Khan who had come here along with his wives and mistresses to enjoy this beauty of this place but the sudden outbreak of this mysterious disease forced him to leave this place at the earliest. Since Fadai Khan was heartbroken and full of qualms, he never came back to this place and the  were left in peace for ever after.

How to reach Pinjore Gardens

Pinjore, is situated at an easily approachable location. One can reach here by road from Chandigarh city or by rail too. It lies en-route Shimla and is also approachable from Amabla landran road. The distance of the garden from Union Territory Chandigarh is approximately 12 kilometres.