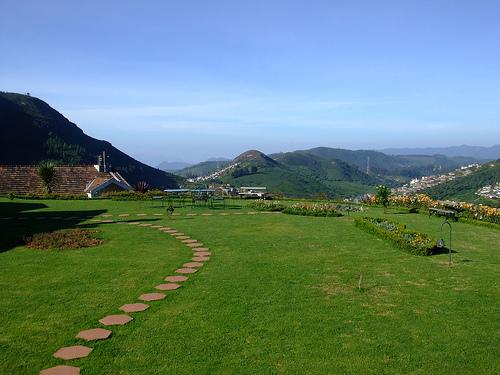 Nearby Panchkula lie many hill stations and towns perfect for a weekend getaway and even a long rejuvenating getaway. Below is a brief about the various hill spots that one can visit while in Panchkula.

Kalka is a city and a municipal committee within Panchkula district in the Indian state of Haryana. It is located on the NH 22 enroute Chandigarh to Shimla, and is the terminus point of the Kalka-Shimla Railway. The town is situated at the foothills of Himalayas and is an entry point to the hilly state of Himachal Pradesh – also known as the ‘The land of Gods’. The name of the town has been derived  from the Goddess Kali and an ancient temple of the Goddess is located here. The temple sees thousands of pilgrims turning up each year with a particularly heavy footfall during the Hindu festival of Navratri. In 1987 an ancient temple of Balaji (childhood incarnation of Hindu god Hanuman) was excavated in village "Bhairo ki Ser" on one of the hills overlooking the town. The temple is managed by Shri Ratan who is the "mahant"(head priest) of the temple. The temple is slowly developing into a major pilgrim attraction.

Pinjore is a small, secure residential 'township' with easy access to  educational, cultural, professional and recreational opportunities which are par excellence of Chandigarh - one of India's most desirable places to live. Set over more than 1800 feet above the sea level in a beautiful valley, overlooking the Shivaliks, it is a pollution-free area away from the maddening crowd of the cities, which offers perfect ambience not only for physical well-being but also for the harmonious development of mind and spirit. Shivaliks mark the beginning of the most spectacular and majestic mountains, beckoning the travelers to continue their journey tirelessly upwards. The average temperatures for summers and winters are 34 and 19 degree Celsius respectively, with rainfall largely concentrated over the summer months of June,July, August and September.

Kasauli is another beautiful and must sought after hill station of North India. This small hill station seems to live in time warp that belongs to the 19th century. The narrow roads of Kasauli crawl up and down the hillside and offer some magnificent scenic beauty. Directly below is the spread of vast plains of Punjab and Haryana which as darkness falls, unroll a gorgeous carpet of twinkling lights. At 3645 m, the peak of Choor Chandni also called the Choordhar, majestically dominates the lower hills and across the gorgeous ranges, Shimla is visible.

The upper and lower malls run through Kasauli's length and one can enjoy longs walks there. A mixed forest of pine, oak and huge horse-chestnut encircles the town. Its colonial ambience is reinforced by stretch of neatly cobbled road, old world  shops, wooden houses with charming facades and the area is dotted with number of neat little gardens and orchards.  Kasauli is easy to reach by road from New Delhi, Chandigarh, Shimla and other major cities in Northern India. The most convenient way is to take the bus to Shimla and deboard at Dharampur. One can also opt for  the Kalka-Shimla toy train to Dharampur. Frequent bus service connect Dharampur to Kasauli bus station. 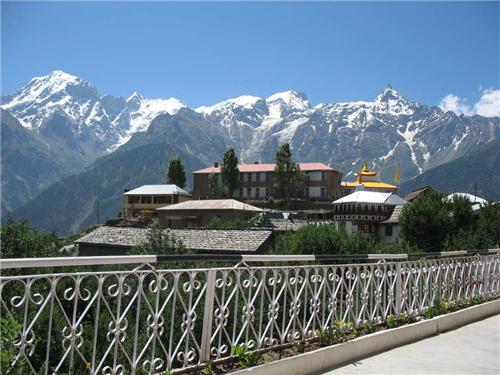 Designated as the Summer Capital of the British in India, Shimla was the country's focus for the better part of every year during their reign and now, is the state capital of Himachal Pradesh.

The mountain city  has all the well developed facilities, easy and convenient accessibility and numerous tourist attractions making it one of India's most popular hill town. Perched beautifully in the lower ranges of the Himalayan mountains, it is embellished with beautiful trees pine deodar, oak and rhododendron forests.

Towards the northern side lie the snow-covered high-ranges, while the valleys are dotted with whispering streams and swaying fields. Inside the town are host of splendid colonial structures, quaint cottages and charming walks echoing the British era gone by. Shimla offers a variety of options of  shopping, sport and entertainment activities. The best and the most exciting way to reach Shimla is board the toy train from Kalka while enjoying the exquisite beauty of the place. 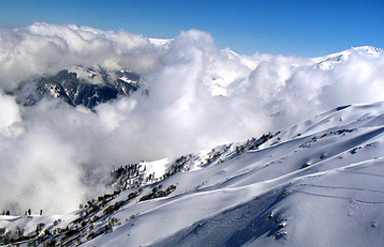 When Bhupinder Singh, Maharaja of Patiala was expelled from Shimla - The Summer Capital of the British India, annoyed by the insult , decided to create his own capital for the warm months. The little village of Chail seemed perfect. It lay surrounded by magnificent deodar forests, Shimla was directly visible and most importantly, Chail at 2225 m was somewhat higher than British controlled Shimla.

Today, the Maharaja's creation can be savoured by everyone. Maharaja’s palace, now state owned, is a resort in the true sense of the word. A beautiful Palace with antique furniture, cobbled cottages, delightful log huts, dense forests, an orchard of its own, elegant lawns, badminton and lawn tennis court, billiards and even a children's park is truly a delightful experience. Each regally appointed room, each quaint cottage and every warm log hut offers a memorable holiday. Whether one is here for a romantic getaway or in search of seclusion or wish to organize a conference, Chail offers it all.

Then, there are numerous sightseeing places and possibility of some fishing and trekking. Chail also proudly inhabits the world's highest cricket pitch and polo ground. Chail is connected by road. From Shimla via Kufri the distance is 46 km and via Kandaghat is 60 km. Kalka is 85 km away. Regular buses for Chail leave from Shimla, Chandigarh tricity and Delhi. The closest airports are at Chandigarh (121 km) and Shimla (62 km).

A well-laid out picturesque town, Nahan is situated on one of the top ranges in the Shiwalik Hills, opposite of green hills. Traditionally, saints and princes are linked with the origin of the town of Nahan. The city was founded as a capital by Raja Karan Prakash in 1620. Another version recalls a saint who lived here with a companion named Nahar on the site where the Nahan palace was erected and now stands.

At an altitude of 930 m, Nahan is a good base for visits to the surrounding areas such as Renuka, Paonta Sahib, Trilokpur temple and the Suketi Fossil Park. The town has a pleasant climate throughout the year and  also has a man-made lake and decorated with temples and gardens.